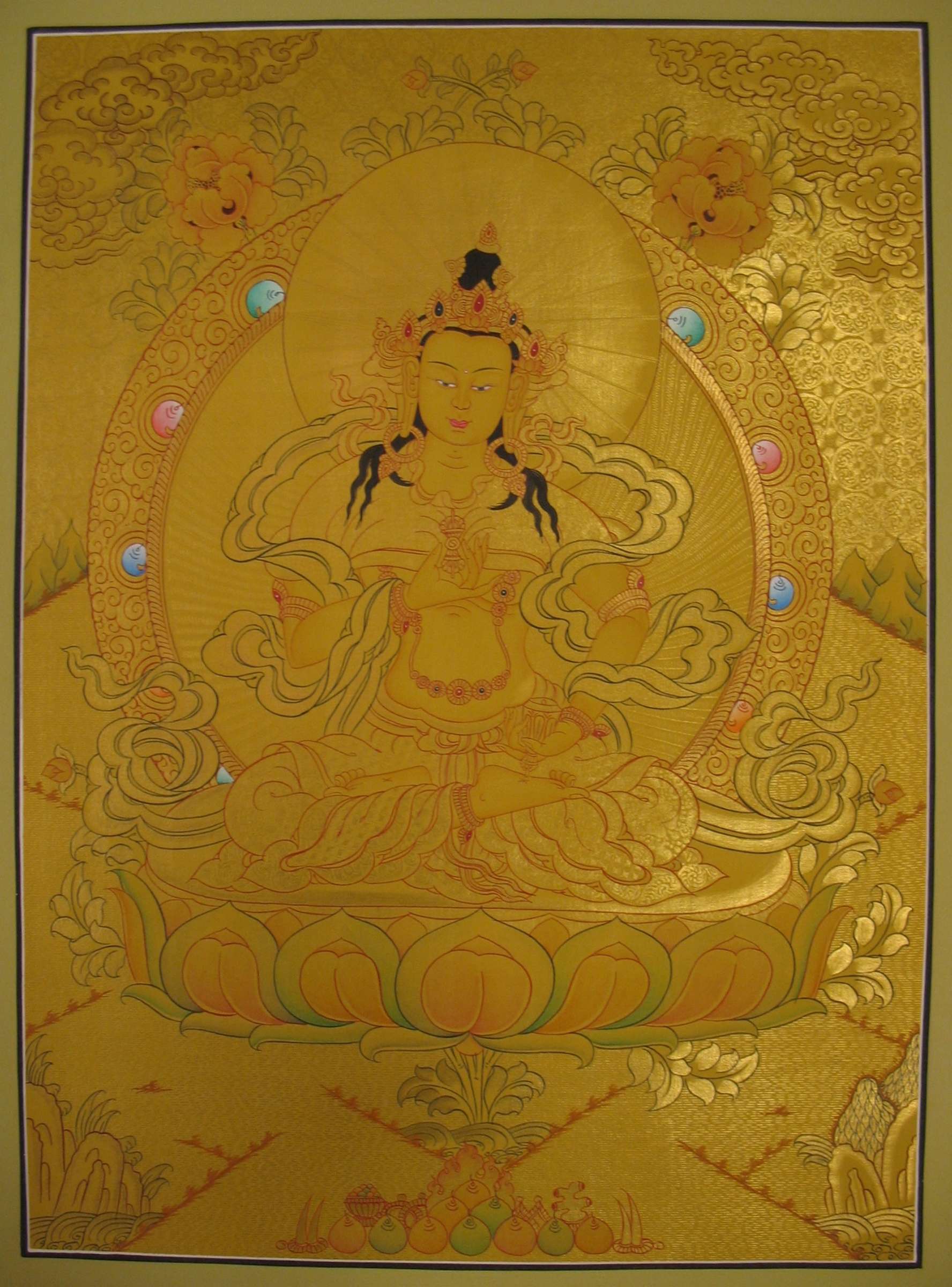 Scroll painting of Vajrasattva art is handpainted in Nepal by using traditional Color. Vajrasattva  (Yab-Yum) is the archetype deity.

Scroll painting of Vajrasattva art is handpainted in Nepal by using traditional Color. Vajrasattva  (Yab-Yum) is the archetype deity.  He is supplicated in the special yoga of repentance that employs his well-known hundred syllable mantra.

Vajrasattva is presented at the center of the painting. The vajra held before his heart in his right hand and the bell in his left symbolizes compassion and wisdom.  He is shown here with his consort who holds a skull cup, symbolizing spiritual powers and a “driguk” knife that slices through the illusion of duality.

This exquisite thangka depicts Vajrasattva with his consort, Vajratopa (Dorje Nyema) who is unclad.  Except in Dharmakaya depictions, such as Kuntuzangpo/ Kuntuzangmo, Yum deities usually have small skirts and scarves.

Vajrasattva is pure white in color and is sometimes known as the Prince of Purity. His name means “Adamantine Being”, or more poetically “Embodying Reality”.

He is a member of the Vajra family of Aksobhya which also includes Vajrapani. He is depicted as a young man in the prime of life, with all the silks and jewels of a wealthy prince.

In his right hand, he delicately balances a vajra at his heart. In his left hand, he holds a bell at his waist. The vajra represents Reality, and Compassion; while the bell represents Wisdom.

Vajrasattva is said to have been originated from the seed syllable Hum and is generally invoked for removal of obscuration of Kleshavarana and Jneya Avarana.

His hundred syllable mantra is very efficacious in purifying our defilements through confession practice. It is said if confession is done with the four opponent powers, then non-virtuous actions or obscurations will be purified.

The third opponent power is desisting from evil deeds. The fourth opponent power is to apply the power of good deeds; and especially regarding this case, practicing the meditation and recitation of Vajrasattva without parting from Bodhicitta while remaining in the state of emptiness.

Vajrasattva is a very popular tutelary deity for Nepalese Vajracharya. He is worshipped very often by Nepalese Buddhists through the Guru Mandala ritual.

In some mandalas Vajrasattva represents the Adi Buddha or the Primordial Principle of Buddhahood in others, he changes places with Aksobhya in the East.

In Shingon Buddhism it is Vajrasattva that passes on the initiation of the Dharmakāya Buddha Mahāvairocana to Nagarjuna, thereby creating the Vajrayana lineage.

Oṃ. Vajrasattva, keep your Samaya. As Vajrasattva, remain near me. Be steadfast towards me. Be very pleased with me.  Be completely satisfied with me. Be loving to me. Grant me all accomplishments. In all actions, make me mind pure and virtuous. Hūṃ. Ha ha ha ha hoḥ. O Blessed One, Vajra-nature of all the Tathagatas, do not abandon me. Be of vajra-nature, O great Samaya-being, aḥ.

You need to Login first